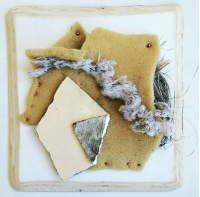 Since a while now, very ordinary things are drawing my attention the most.
The little things, you know.
The things everybody sees all the time and at the same time not.
Not anymore.

Things which are unnoticed, because they are so general, so omnipresent that we just oversee them as our brains already have them categorized, already "know“ what they are.

But do they really? Is a stone just a stone, a piece of rubbish just a piece of rubbish? Well...
When I walk on the beach, down the driveway, in the towns' and cities‘ streets, those little, unnoticed, lost and meaningless things find me. It is not the other way round! Something just all of the sudden crosses my way and catches my draws my attention.

Where do they come from? What was their purpose? Maybe they still have one?

Things which seem to be special and have a story to tell.
A secret story.
A silent narration.

Seeing it is the first step, giving attention to it.
Then thinking more about it, collecting more of it, more things similar to it.
Doing researches about it. Getting a bit of knowledge about it. Specialist knowledge.
Keeping all of it as there is something to reveal about it.
Excitement comes with it.
Where will this lead to?

Then often it takes time. Often a long time.
All those little things just sit around.
Waiting.

Sometimes I take them from the shelves and I play around with them.
Composing.
Destructing.
And composing again.
Combining things together.

Sometimes everything seems not right, senseless, even stupid and irrelevant and I stop.
I put them back on the shelf, back in the box.

But another day I might have found a new item and combining it with those I played so many other times before with, but only now, in combination with that one other little thing, it works out, the purpose is revealed! And it‘s like finding a home for some dear friends. I don‘t have to worry about them anymore. A feeling of relief and easing.

Using marks which are already made and materials which are already there makes only sense for me considering the take-make-dispose-society of today and the impact on nature this causes on one side and the sensory overstimulation by the flood of (digital) pictures we're surrounded by nowadays on the other side.

Exploring their textures, materiality, shapes, colors, and origin and putting them in new contexts, giving them meaning and making them visible is most fascinating for me and it feels important.

I want to make aware of those aforenamed problems and counteract them by actively putting the focus on the simple things which surround us in everyday life and the act of "cleaning up" itself (as collecting trash from beaches and urban spaces is what I'm doing in the first place).

Other assemblage artworks by Kurt Schwitters, Joseph Cornell, Robert Rauschenberg, and Jannis Kounellis to name a few always fascinated me. And thinking back, I have been collecting and picking up since quite a while now. Some items in my collection I have since ten or more years now. Other people can not always understand that. But it doesn‘t matter.
Those little things and me, we have a relationship. We have a story. And one day they will have a purpose, a meaning again, manifesting in one of my non-objective, conceptual artworks

Little things, drawing my attention
+ Text Size -
Do NOT follow this link or you will be banned from the server!