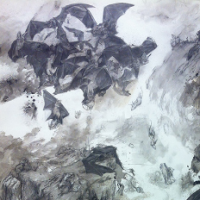 Entries for the 2017 Parkin Drawing Prize are now invited. Artists are now encouraged to prepare for this year’s prestigious competition, which attracts a major cash prize of $20,000 and national recognition.

Founded by arts patron, businessman and philanthropist Chris Parkin, the national drawing prize is now into its fifth year and has grown into a well recognised competition not to be missed in the New Zealand arts scene. 10 highly commended prizes each worth $500.00 are also offered to artists as an added incentive.

Drawing artists of all ages and abilities, the competition has come become a hot topic of conversation amongst artists and non-artists.

“Over the years I think the competition has increasingly sparked interest not just because of the attractive prize and recognition for artists but it’s also been a topic of controversy and heated discussion amongst both the artist community and members of the public. We continue to see a lot of foot traffic every year when the free exhibition of short-listed works is showcased at the Academy of Fine Arts in Wellington,” said Chris Parkin.

Previous recipients of the award include Monique Jansen (2013) with AO Folded Moire Drawing ; Douglas Stichbury (2014) with Observer , Gabrielle Amodeo (2015) with The Floor We Walk On and Hannah Beehre’s Catastrophe last year.

“Every year I’m blown away with the remarkable range and creativity of drawing styles entered from the incredibly simple to the incredibly complex, from the conceptual to the highly detailed. It’s also a great opportunity for young artists to establish a presence for themselves – if they are shortlisted it puts their work among other professional artists. I’m excited to see what we have in store for 2017” said Parkin.

Finalists will be pre-selected by an Advisory Panel, members of which are currently under selection.

Entry forms and further information are available on www.parkinprize.nz.  Entries close at 4pm on 16 June, 2017 and the winner will be announced on 1 August 2017 to coincide with a public exhibition showcasing all finalists’ works to be held at the New Zealand Academy of Fine Arts in Wellington.

Rebecca Reed at Rebecca@arribapr.co.nz or visit www.parkinprize.nz for more information on the award.