Congratulations to the 2015 winner, Gabrielle Amodeo 2015 Parkin Drawing Prize Winner with “The Floor We Walk On (a drawing of the entire floor of our house)”.

Dick Frizzell in judging this year’s entries said of Gabrielle’s work “This combination of Conceptual Art and exhausting effort usually irritates the hell out of me and I tried very hard to avoid the obvious. It’s an Art Prize irony that sometimes a work can be the obvious winner AND the obvious loser…through the vicissitudes of the judging process…but I kept coming back to Gabrielle’s work, finding more to like every time (note the subtle titling and organising system on every sheet!) and eventually I gave in to the inevitable. It is a significant work.

The standard throughout was remarkably high and I had very little trouble drawing up the ‘undercard’ of 10. I looked for works that didn’t look as if they were self-consciously produced to some imaginary Competition Standard …becoming over-egged to within an inch of their life in the process.  Overall I’ve tried to cover the field…including works that may be generic but succeed as brilliant examples of such.

And the rest? Some drawings just try too hard…straining for effect. Some get far too cute altogether and some make too much of the business of ‘challenging the definition of the medium’ …a conversation that I’m not really interested in engaging with to be honest.  But altogether…a very successful presentation.”

Of the work Gabrielle says…

“This work comprises approximately 1200 rubbings of the entire 942m floor-space of the house the artist and her partner own and have, until recently, lived in, creating a floor-print.

Addressing the space that holds a relationship­—the home—this collection of rubbings is a poignant accumulation of fragments of existence from this lived-in space.  The rubbings from each room were put back together, like a 1:1 map, and then folded into their own set of covers.

Hannah Beehre – Battle of the Mice and Frogs (after Kyosai) 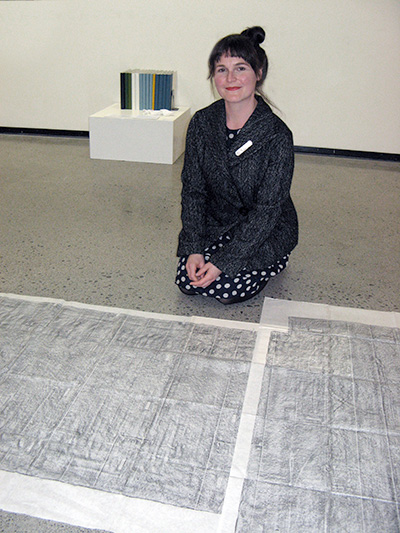 2015 Parkin Prize Winner: Gabrielle Amodeo with her winning entry “The Floor We Walk On”.