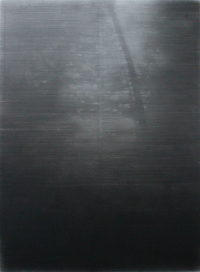 Michael Dell from Nelson has been announced the winner of the 2019 Parkin Drawing Prize and a $20,000 cash prize – sponsored by Chris Parkin, arts patron and philanthropist.

Michael’s work ‘Every Valley’ measuring 1.9 metres by 1.4 metres, a charcoal drawing on a prepared canvas stretcher, was chosen as the winner from an impressive 472 entries nationwide and 78 finalists at the New Zealand Academy of Fine Arts’ Academy Galleries on Monday 5 August.

Reflecting on the winning artwork, John Gow, the judge for this year’s prize said:

“Michael’s work drew me back many times, both mentally and physically. I was most impressed with the professional manner in which the work had been made and the mystery to the eye created by the composition. Was I looking through a window to foliage outside, the valley beyond? Was I looking at an abstract which caught the light with its contrasts of pigment application accentuated by the tooth of the canvas?

The compositional division created by the stretcher bar behind the canvas gave this work a formal element which interfered with the eye reading what could otherwise be interpreted as a very organic composition. This bar element also gave the viewer the feeling of a window view of the beyond. Quality of image, quality of materials and quality of thought all added up to a winning combination in my mind’s eye. The work also had a strong ‘drawing’ element which was an important factor in my somewhat traditional decision making process.”

Dell, who was a highly commended recipient of the Parkin Prize in 2017, says he is overwhelmed with the award.

“I am truly blown away to be the recipient of the 2019 Parkin Drawing Prize and am incredibly grateful to Chris Parkin for the establishment of this prestigious award.  My work Every Valley is intentionally ambiguous. It is the idea that narrative is not one thing or another, it’s open ended, like nature; it has no meaning in itself, only what we bring to it, what it means to us, our place in it and how we view it.

“Drawing has always been a necessary part of my art practice. I have always liked the darkness and heaviness of drawn charcoal on a surface. There is a powdery richness which can be very tonally versatile”, says Dell.

Michael Dell works out of his Nelson studio, but regularly heads out to nearby Pigeon Valley, on the edge of Moutere Forest, where he gathers information and resource materials for his work.

“I like the impartial and arbitrary character of the natural world; it exits on its own terms, regardless of how much we try to control it. A lot of my work is based off photographs I have taken around Pigeon Valley. I have always liked the way a forest is often portrayed in cinema and film. I think this work has a filmic sense to it, which I like, you’re seeing the beginning of something or maybe just the end of it,” says Dell.

Michael Dell was born on Banks Peninsula in 1960. He began painting with watercolour in 1983 and received several awards over the following years. He graduated from the School of Fine Arts at the University of Canterbury in 1994 and took first place in the Cranleigh Barton Award that same year. Since then Dell’s drawings and paintings have appeared in solo and group exhibitions in Christchurch, Dunedin, Hamilton, Auckland, and Japan.  Dell is widely recognised for the particular surface quality of his work, and has work in a number of public collections, including: Christchurch Art Gallery, Auckland University, TSB Wallace Arts Trust, The Centre of Contemporary Art, and Tokyo Bank, Japan.

John Gow also awarded 10 highly commended prizes worth $500 each.  The recipients include Kathy Barber  for Unspoken (Auckland), Gabriella Challis for Everything But The Bathroom (Ngatea), Matt Ellwood for Autumn / Winter (Kobani) (Auckland), Emily Gordon for Frame in Black (Dunedin), Weilun Ha for A big heart is a fragile one (Auckland), Kim Ireland for Twenty-four (Nelson), Gaye Jurisich for Incumber (Hamilton), Caroline McQuarrie for Prospects Fearful Folio (Wellington), James Ormsby for The House of  Te A  (L.D.26 + 27) (Tauranga), and James Robinson for In and Out (Dunedin).

“When I founded the Parkin Drawing Prize seven years ago I hoped it would create a resurgence of interest in drawing, empower artists, and get the drawing conversation going between artists and New Zealanders in general – this, I believe, has been achieved. I’m genuinely thrilled with the consistency of this competition over the years, the high calibre of entries, the sometimes ‘heated discussions’ as to what drawing is, and the fantastic reception from the public. I can only encourage people to pay a visit to the NZ Academy of Fine Arts this month and see the amazing collection of artworks on display,” said Chris Parkin.

The Parkin Drawing Prize exhibition season runs until 8 September at the New Zealand Academy of Fine Arts Gallery Academy Galleries, Queens Wharf, Wellington. All the artworks will be for sale giving admirers and collectors the opportunity to purchase some wonderful pieces.

+ Text Size -
Do NOT follow this link or you will be banned from the site! Original generation time 0.1791 seconds.